Bangkok is a city with something for everyone. Whatever your interest(s) – culture, art, religion, gastronomy, massage, shopping, all-night partying – the city undoubtedly has something to pull you in. I have been fortunate to visit Thailand’s capital and largest city five times. Each time, my to-do list quickly runs up against the laws of physics, as there is only so much which can be compressed into a narrow timeframe. This constraint is exacerbated by the city’s severe traffic jams.

My most recent trip was no exception. Xiangyun and I found a perfectly-timed 11 PM Friday night flight, which arrived at Don Mueang Airport around 1 AM local time. Unfortunately, thousands of other travelers had the same idea, resulting in a long wait for Xiangyun in the visa line. Walking in the wee hours from the airport to our guesthouse was surprisingly serene, with the night sky guiding us for the short ten-minute walk. We arrived at around 3 AM and quickly crashed, only to awake a few hours later to the crow of roosters. 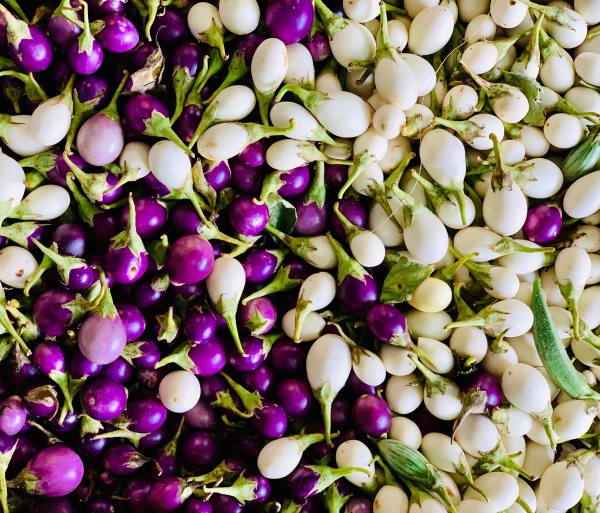 When we did finally get up, we wandered over the nearby morning market. The market featured a cornucopia of fresh fruits and vegetables, as well as both dried and fresh fish, prepared breakfast items, and clothing. Although we were impressed, we didn’t buy anything, settling instead for some fruit at our guesthouse (likely purchased from the market). Wanting a more substantive meal, we wandered a bit and sat down at a small, nearby restaurant. Xiangyun pointed at the meal on a fellow restaurant patron’s table and, through part-English/part-sign language, we ordered up what turned out to be quite an impressive meal,, which we payed for with our entire bag of Thai Baht coins (total cost: 109฿, roughly US$3.50).

After collecting our things and braving ASEAN-weekend Bangkok traffic, we eventually made our way to a ‘cat-fe’. According to BBC, the world’s first cat café opened in Taipei, Taiwan in 1998, and many more quickly popped up in Japan. The ‘cat-fé’ concept has continued to spread, particularly around Asia, although not without controversy. The cafés do celebrate our feline friends, but often at the expense of their peace and quiet. Cat-fé cats can often appear to be commercial props, with a paparazzi of visitors photographing them throughout the day. Many cafés, including the one we visited, have note, providing their feline residents with quiet space away from patrons.

Due in part to its gnarly traffic, Bangkok offers an array of ways to get around. Tuk-tuks, motorbikes, taxis, Grab, buses, BRT light rail, and subways are only a few of the ways to get around. Unless you can afford a helicopter, the most efficient way to travel is generally via water. We discovered this when trying to visit the famed Airplane Graveyard. After afternoon tea that went too long, we surveyed our options for getting to there before closing time. Buses and light rail had us arriving after closing. Taxis were unpredictable in ASEAN traffic. Canal-going ‘water buses’, however, hit the spot.

We quickly hustled our way down to the canal in the muggy tropical heat, taking the stairs down the flyover bridge to awaiting the await the ferry. After about 45 minutes of the crowded ferry meandering through the sewage canal, passing mosques, temples and schools along the way, we arrived Wot Sriboonreung, a grand canal-front monastery. We wandered through the Wot’s grounds and eventually made our way to the other side, where the Airplane Graveyard rather unceremoniously stands. After negotiating a discount on the entrance fee with the lady tending the premises, we made our way inside. 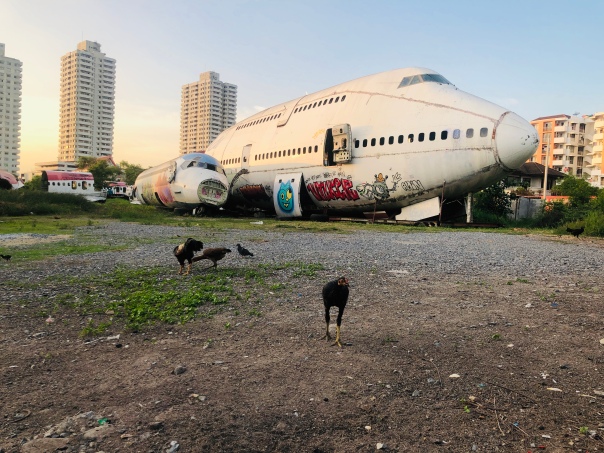 The graveyard compound features pieces of three separate jetliner fuselages, with the planes’ wings and tails casually strewn about. Graffiti covers much of the planes’ liveries, with the interiors largely hollowed out. There appeared no method to the madness; one can climb on the planes at will and mentally try putting the airplane puzzle pieces back together. The provenance of the planes is subject to some debate, making for any eery experience, particularly upon climbing inside. As daylight turned to dusk, we were largely left alone to explore the planes, with only resident family’s dog and chickens accompanying us.

After climbing to the 747’s upper deck and taking plenty of photos, we thanked the family and wandered back to central Bangkok, thankfully via light rail. We stumbled upon a night market with excellent pad thai and iced Chang beer, a great way to cool down in the sweltering Bangkok heat. After our open-air meal, we were ready to crash, but the motorcades for heads of state leaving the ASEAN summit on Wireless Road impeded our forward progress. Along with any other pedestrians, we watched the procession of vehicles motor into the empty streets, with Thai military personnel standing guard.

The next morning, we made our way to the Mo Chit New Van Terminal, where we quickly nabbed tickets to Ayutthaya for 70฿ (~US $2.25) a piece. After an hour of silence in the van, we made it to Ayutthaya, Thailand’s ancient capital. Phra Nakhon Si Ayutthaya, as it is formally known, was founded in 1351 by King Ramathibodi I as the second Siamese capital. Although later destroyed by the Burmese Army in the late 18th Century, many of the old’s city’s sites have been preserved; the Ayutthaya Historical Park is now recognized as a UNESCO World Heritage Site.

Ayutthaya is now a sleepy city on just under 60,000. Surprisingly, most tourists appear to be domestic, perhaps due to a lack of international tourist infrastructure. Nonetheless, Siam’s old capital does not disappoint. The Historical Park consists of no fewer than twelve different temple compounds, including the famed Temple of the Reclining Buddha (Wat Lokayasutharam) pictured above. While Ayutthaya is deceptively close Bangkok, its numerous scattered sites mean one can only take in so much on a single day trip.

With that in mind, we settled on visiting a mere four temples and asked our tuk-tuk driver to drop us by the van stop. A 45-minute ride later and we were standing in front of Don Mueang Airport. With a bit of time to kill, we wandering around the nearby neighborhood and grab street food and Thai massages, both excellent values for the money. Before we knew it, our trip was over and we were pushing our way through immigration and security to board the flight back. A worthwhile weekend indeed.